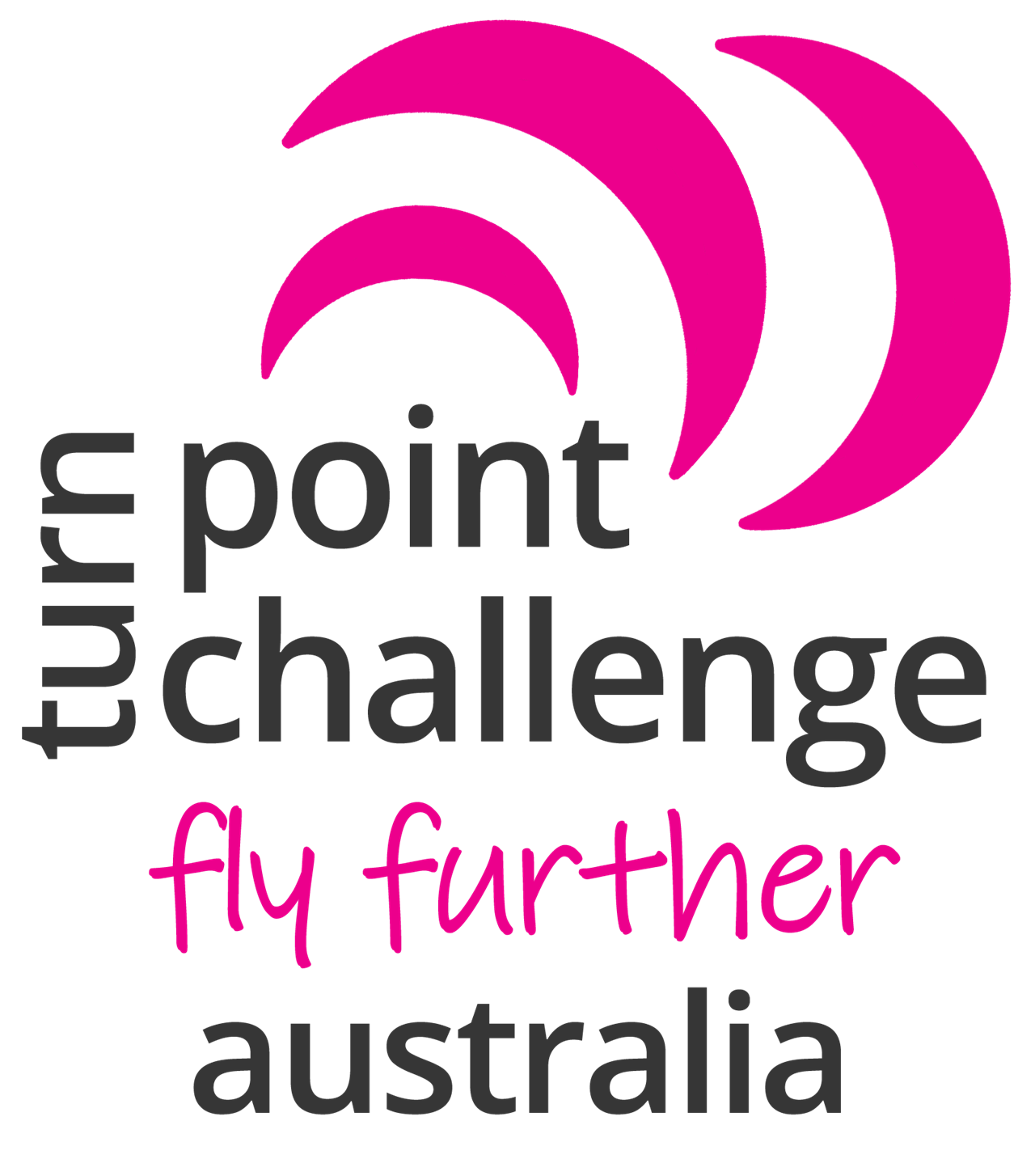 When you register for the challenge you will notice that there are 4 different pilot types that you can register for:

Each of these pilot types may have a different category ie you could be a 'FUN' class paraglider pilot but an 'EXPERT' class hang glider.

HOW DO I KNOW WHAT CATEGORY PILOT I AM?

The categories listed below are used so that you can challenge both yourself and other pilots at your own level.

Pilots are requested to self-nominate their class at the beginning of the season based on the following guide.
Pilots remain within this class for the season.  If a pilot surpasses a level during the comp period, they should remain in their original nominated class.

HOW DO I CHANGE THE PILOT CATEGORY I REGISTERED AS?

If you find that you need to change the category you originally registered in, not a problem.
Perhaps you mistakenly put yourself in too high a category, or someone has pointed out that you are in to low a category.

Simply contact us below advising the reason, your SAFA number and the category to be moved to.
We will repost your flights to the new category for any current challenges.

WHY DOESN'T MY NAME APPEAR IN THE RESULTS PAGE FOR A CHALLENGE?

Don't forget that there are 2 steps to registering for a challenge.
The most common reason that your name doesn't appear under a challenge is that you haven't completed the 2nd step - registered for the challenge.

Step 1 - Register as a pilot within the system
This allows you to pick what wing you fly and what category you are ie fun, sports, advanced or expert.
You can also register multiple flying disciplines eg paraglider, hang glider, tandem pilot etc
You only need to register once within the system.

Step 2 - Register for a challenge
Once you are registered as a pilot you can register for as many challenges as are available to you.

Some challenges may have 'closed' registration which means you have to register via the challenge organiser.
This may be because they are charging pilots to enter the competition or because they want to restrict the participants.

Other challenges are 'self registration' which means you can enter them online via the website.

CAN I USE MY PHONE TO RECORD MY FLIGHT?

We understand that not everyone flies with flight equipment i.e. new pilots and coastal pilots.
As such they probably haven't invested in flying specific equipment for recording their flights.  But don't despair!  Your phone can be every bit as powerful as any of those expensive flight tracking devices.

No matter your phone type, you'll find that XCTrack, XC Soar or FlySkyHy will give you everything you need to participate in the Turnpoint Challenge and more.  And best of all, XC Track & XC Soar are free.

A lot of pilots only use with their tablet or phone as their flight instrument.  So get to it .. download the app to your phone, upload your Airspace file or waypoints and join in

HOW DO I GET THE WAYPOINTS & CYLINDER AIRSPACES ONTO MY DEVICE?

If you're stuck with trying to get the waypoints or cylinder airspaces onto your flight equipment then worry not.  You are definitely not alone.  It's perfectly normal to forget how to do things when we don't do them every day.  And if you've never done it before then welcome to the world of flying with a purpose.

We will be adding the main flight equipment software how-to manuals below.  They take time to create so as they are finished we will add them.

HOW DO I UPLOAD MY .IGC FILE?

In order to score points in the Turnpoint Challenge you will need to upload your IGC file.
At the moment we only accept IGC file formats which may mean it is a 2 or 3 step process.

We will be adding the main flight equipment software how-to manuals below.  They take time to create so as they are finished we will add them.

I WANT TO RUN A CHALLENGE - WHAT DO I DO?

If you'd like to organise a challenge for your local club or state just reach out to us via our Contact Us page.
We are actively looking to have this challenge platform taken up in other states and countries.  We'd love to hear from you.

WHAT IS THE DIFFERENCE BETWEEN A WAYPOINT AND A TURNPOINT?

WAYPOINT
A Waypoint is a place on earth.  the 'Waypoint' is the fixed centre point defined by name, X,Y,Z description.
A Waypoint has a Name, Latitude, Longitude and Altitude above sea level (in metres AMSL)

A waypoint is a set of co-ordinates that identifies a single point on a map.
These waypoints then have a cylinder set around them which becomes a turnpoint.

The cylinder size that we use for the Turnpoint Challenge is a 400m radius.
This means that if you fly within 400m of the waypoint you will have hit the edge of the turnpoint and have successfully tagged it!

REMEMBER:  You don't have to hit the waypoint to tag the turnpoint.  Some waypoints on the coast are actually in the ocean, however, the turnpoints can be tagged safely without having to fly over the water.

Turnpoint is the term used for 'turnaround points'.  In the days before GPS pilots would have to have to fly around a point, photograph it from a defined FAI sector, then go to next Turnpoint.  Pilots would have to use manual navigational skills to go find them.  Pilots took photos to identify the point and were severely punished if the set feature was not in shot.  Competitions have been lost through pilots taking pictures of their boots!

Once GPS emerged on the scene pilots began to use a radius.  The Waypoint was extended out on a given radius where we had to turn.  So the waypoint then became the TurnPoint.  All competition task boards now refer to Turnpoints.

WHY ARE THE TURNPOINTS DIFFERENT COLOURS?

A lot of thought has also gone into the degree of difficulty or accessibility of turnpoints.

As a guide turnpoints have been graded from Green which are easily accessible and not too intimidating to Black - remote waypoints that only very experienced XC pilots should attempt.

NOTE:  Pilots are advised to use their good judgement regarding the accessibility of turnpoints in association with the prevailing conditions and their personal skill level.

TURNPOINT DENSITY - HOW MANY SHOULD WE HAVE? 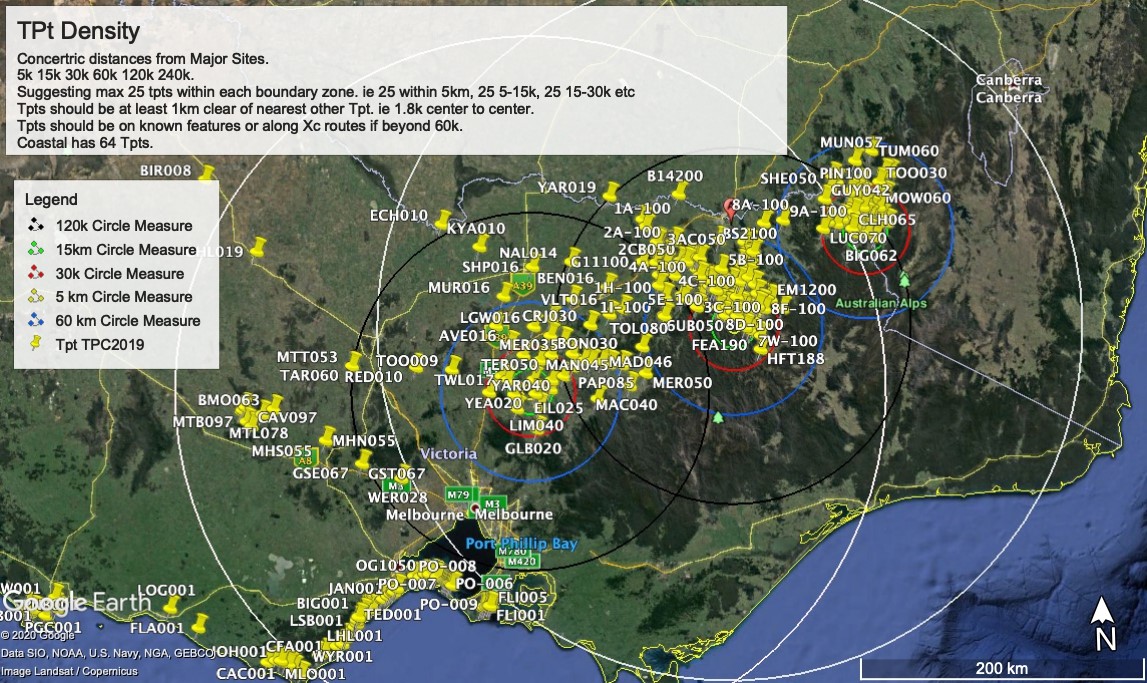 The team has aimed to balance out the density of waypoints doable from any one site and balance numbers between coastal and inland.

There are approximately 100 turnpoints on the Coast.  Getting all these would need visit to a few of the coastal sites.

To improve the distribution from the Victoria 2019 challenge Mystic received a little thinning and some were better placed.  Other areas received a significant boost with local turnpoints added at 5km and 15km.
Turnpoints at 30km and beyond were added along XC routes.

So, a pilot who mainly flys coastal can get up to 100, which balances with a Mystic pilot not venturing more than 30km, those who mix match coastal/inland will surely tag more, and those who fly all sites will get the most and have expanded their flying experience the most.

Whilst this example was drawn from the Victoria 2019 & 2020 challenges, it is a worthwhile exercise to keep in mind when creating waypoints / turnpoints in other areas.

HOW TO NAME A TURNPOINT

Waypoints were initially collected from various competition files.
Pilots may be already familiar with that name so in general, if a waypoint existed in an existing waypoint file the name has been retained

The convention used for the first 3 characters is as follows:

NOTE:  For waypoints on mountains, drop the reference to Mt or Mount and use the mountain name instead
ie Mt Broughton could become BRN, Mount Wellington could become WLN etc

It is important that the waypoint names are UNIQUE, so if you have 5 turnpoints in the same area, all with around the same height, you have a few options :

Join our Telegram group to keep up to date with new challenges and other exciting news.
Our Youtube channel is also being updated with useful videos.